Well, not quite.  But that’s what a lot of North Americans would have believed about the ‘commies’ in the Soviet Union if they had been told by a reputable source like Rush Limbaugh (who was a DJ in the 70s, but you know what I mean) that this was God’s own truth.  I remember when I was in school I had the impression of the Soviet Union as a drab, grey place.  I mean, how could it be colourful…a bunch of communists lived there and communists abhor colour, we all know that.  The photograph below  is of the Soviet Union, a publication started by Maxim Gorky,  a Russian writer and journalist who wrote many novels, plays and poems.  He was jailed by the Tsars several times during the last days of the Empire.  He was always pro-Bolshevik except for some censorship issues during a short period of time  during his career.  He was born in 1868 and died in 1936.  He is a hero in Russia even today.  But this post is not about Gorky, it’s about the Soviet Union, the publication that attempted to dispel negative and distorted American views of life in the Soviet Union. This publication appeared in 19 languages and was distributed widely outside of the Soviet Union. 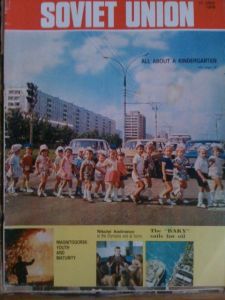 The children in the photograph, in their mid-thirties now, are colourfully dressed, probably off on some kind of field trip. I’m guessing they’re not destined for a meat processing plant either as many Americans would have half expected back then. Lots of colour in this photograph.  Kids seem to be having a good time.  They lived in a town called Togliotti on the Volga river where the Lada car was and is still built to some extent. The article about them is called: All About A Kindergarten.  The kindergarden in question sits among row after row of 5 or 6 storey massive apartment buildings designed to house the masses of workers while the ‘management’ of the Lada factory drove to work in his Mercedes and lived in his detached family home out in the suburbs.  No classes in the Soviet Union?  Not at all.  The Soviet Union was one big workers’ paradise where everyone was equal. One of the features of this edition of the magazine, which has no ads in it as one would expect, is about  the “Baky” oil rig which the magazine proudly holds up as an example of Soviet superiority in engineering and production.  Another feature is about Nikolai Andrianov, the Olympic gymnast who won 7 medals, 4 of them gold.  Adrianov is held up as a model for Soviet children much as Olympians are today.  He makes as good use of his leisure time as his training time the editors are proud to point out.   They never pass up a chance to hold up Soviet practices as superior to those in capitalist countries.  They write: “People in the socialist countries devote from two to six times as many hours to improving their general and specialized education as do people in the capitalist countries.”  Soviet Union is clearly a propaganda tool, but what should we expect?  Not all Soviet publications were so blatantly propagandistic, but this was this publication’s principle goal.  There is hardly any mention of politics in this issue except to report that there is some resistance in the West to more economic cooperation between European ‘capitalist’ and ‘socialist’ countries.  However, the reality was that there was a lot of cooperation during this ‘detente’ period between the Soviet state and ‘businesses’ and Western European countries.  It’s this ‘rapprochement’ that led a few years later to Peristroyka, the demise of the Berlin Wall and eventually, Valdimir Putin.  It wasn’t Ronald Reagan who engineered the end of the Berlin Wall, as many Americans believed at the time, it was the class system in the Soviet Union and the slow infiltration of ‘business’ in production and distribution (both domestic and foreign) that made a lie of the communist ideology.

Activity on this blog